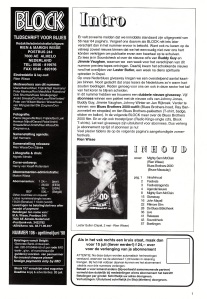 The magazine pages have come from our friend Feelgood. The translation — rough as it is — from Google Translate with some contextual editing. Some of the facts here are unverified by No Fightin’, and may be unclear or incorrect because of the translation. Any help with a better English version is appreciated.

On Saturday, May 2nd the Moulin Blues festival closed with the most exciting and impressive jam that I experienced since North Sea ’83. Lester Butler ruled with a firm hand members of his group of 13, half the James Harman Band, ex-Red Devil Paul Size, Joe Louis Walker and Billy Branch. In addition, he sang and played like he was possessed by the devil.

It must have been Lester’s last performance, because in the night of Friday, May 8, Saturday, May 9, he is dead in his Los Angeles residence under rather dubious circumstances.

Butler had, when he was in Ospel, just had a rehab regimen of drugs behind him. Everyone who knew him knew he was a lover of drink and drugs, something he himself never has put under a bushel. After returning to Los Angeles he came into contact with some old “friends,” which in fact turned out to be his former heroin suppliers. They would have administered Lester, with or without his consent, a speedball (mix of heroin and cocaine), after which he has become unconscious. The friends, a couple, drove aimlessly around with him some time in Lester’s van and also served him some cocaine.

After his condition worsened he was dumped on the doorstep of ex-Red Devils and ex-Blasters drummer Bill Bateman. Because all parties had a drug past was fear of the police called an ambulance. Ultimately, a roadie brought him to the hospital where death was determined. (Those) Closely involved in the case report that Lester could have been saved by an emergency admission to hospital. Three persons in connection with the case are in custody. They were initially charged with murder. Lester Butler and his band formed in ’88 as a session and became known as Red Devils in their ’92 debut album “King King” was released. The band was more or less by chance from jamming in a club that was located in the former Chinese restaurant King King.

Besides Lester the brothers Jonny Ray Bartel and Dave Lee, drummer Bill Bateman played in it and the band was called The Blue Shadows. When Paul Size from Austin on bass guitar and switched Austin swapped Los Angeles for the band was complete and changed its name to The Red Devils. Butler wanted the old Chicago band sound, as in the music of Muddy and Wolf can be heard. That same year the band recorded with Mick Jagger a blues CD, which after much wrangling just as bootleg on the market. Johnny Cash recorded for Def American CD also never came from the vault. But the tone for success was put.

In ’93 the band toured extensively throughout Western Europe, she closed Moulin Blues and opened them Pinkpop. Exactly one year later the band, even after Billy Boy Arnold at North Sea ’94 had acted on her butt.

There appeared another with guest musicians mini-CD and Lester played with a hastily convened lineup — which included Kid Ramos — on-Bluesrock Tegelen ’94.

It was the swan song of The Red Devils. Start with Butler ’96 was ex-Mighty Flyer Alex Schultz (gtr) for the band 13. The Hightone CD “13 featuring Lester Butler” just brought a little more polished sound than we were accustomed The Devils. Except that new Butler compositions were played, the band expressed its stamp on classics by Wolf (“Smokestack Lightnin'”), Muddy (“Close To You”), Dr. Ross (“Boogie Disease”) and Big Joe Williams (“Baby Please Don’t Go”). The band seemed destined to become successful, but Lester’s death brought its existence to an abrupt end.

Lester Butler was 38, a year older than his idol Little Walter, and [EDIT: Needs better translation] and two wonderful CDs behind.