DVL is the name of a “supergroup” of musicians uniting to revive the spirit of The Red Devils in 2016.

The band is Austin blues player Guy Forsyth (Asylum Street Spankers) and three members of UK’s The Hoax — Jon Amor, Robin Davey and Mark Barrett. The Hoax was known for having been inspired by the Devils; DVL’s European tour takes that inspiration full circle. 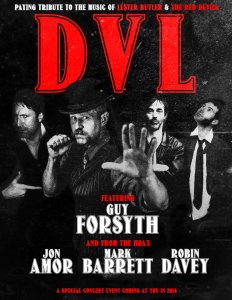 Let’s let them tell it:

In 2013 after a brief dressing room discussion at the Bluesrock festival in Tegelen NL, Guy Forsyth joined The Hoax on stage for a riotous version of Going To The Church by The Red Devils. “We should do this again” was the inevitable discussion post show. Fast forward a couple of years and after a few emails back and forth DVL was born.

What stands out to me about this tribute vs. some of the others out there is that it focuses on The Red Devils, rather than only Lester Butler, who has become a significant cult figure in Europe 18 years after his death. The landmark “King King” album is too often forgotten in Butler’s cult of personality.

DVL also feels like a complete presentation and band, rather than any type of all-star lineup.

Forsyth emailed me a few weeks ago. I don’t think I am betraying a confidence to say he is a true Red Devils fan since running into the gang in Texas in 1992 and again in Holland in 1993.

The tour runs through August and September. Audiences in the UK, Netherlands and Denmark, take warning.