Since 1992, I have kept a copy of “King King” somewhere near me at all times. 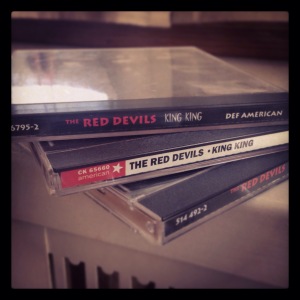 For a long while, I had several burned CDs of “King King” that were left in various cars and desks in my life.

If I bought a spare copy of the record, I might buy two, to give it away as a gift or for “just in case” — before digital downloads, I was sure the disc would go out of print and I would never be able to get it again!

Now, I can call up the rarest Red Devils or coolest bootlegs with just a couple of swipes on my iPhone.

From satellite radio and Spotify to a cassette found on eBay to the fantastic limited edition 20th anniversary 180 gram red vinyl edition, “King King” is a must-have never more than a few feet away.

How do you listen to “King King”? What format is preferred? Where is your prime listening space? Let us know in the comments.