One of the best interviews with Lester Butler floating on the Internet is a 1997 Q&A with New Zealand music magazine The Real Groove called “13 with a bullet!” It touches on blues, drugs, religion and spirituality, tattoos, death, rehab and more. The interview is getting harder to find on the web, so here it is once again:

LESTER BUTLER — 13 with a bullet!
By Arsenio Orteza, The Real Groove 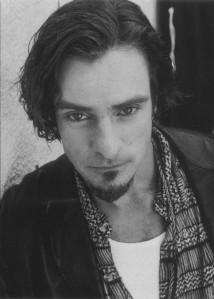 Were truth serum forced down the throats of blues aficionados, many of them might confess to admiring or respecting the importance of the blues a lot more than they actually enjoy the music. And who could blame them? The blues is, after all, the most repetitious music in the Western world, and let him who has never trumpeted music for ulterior motives cast the first rolling stone.

Lester Butler, the 37-year-old, harp-playing force of nature who first came to notoriety as the front man for the late and much-lamented Red Devils, plays a different kind of blues altogether. In fact, he and his new band 13 don’t so much play the blues as allow it to inhabit them and throttle them within an inch of their professional viability. (“We broke mics, and it was fun,” laughs Butler in reference to the recording of 13 Featuring Lester Butler, their new Hightone album. “But we’ll never record in that studio again because they’re totally pissed at how many mics I broke. That wasn’t ‘respectful.’”) As a result, the 13 songs on 13 Featuring Lester Butler — especially the homicidally maniacal “Plague of Madness” – don’t sound performed so much as possessed.

Butler, who almost played New Zealand several years ago with the Red Devils, recently talked to Real Groove about his past, his present, the number 13, why some of his friends occasionally look at him funny, and why Kenny Wayne Shepherd deserves to be eaten by B.B. King.

REAL GROOVE: At one point the Red Devils were booked to play in New Zealand, but you canceled at the last minute because…
LESTER BUTLER: No, we didn’t. We never cancel.

RG: What happened?
LB: Whoever was involved in promoting it couldn’t put the money together. It was going to be the Paladins and us. I was stoked to go, too.

RG: The cancellation had nothing to do with the Red Devils turning into Bruce Willis’s backing band?
LB: That’s such bullshit. I played with Willis for a long time because he’s my bud and I ran the Planet Hollywood band, but…

RG: —–
LB: I’m being sarcastic. My girlfriend’s looking at me like, “Gosh, you’re blowing it again!”

RG: The cancellation boiled down to money?
LB: Yeah, but that’s cool. Business is business. Somebody couldn’t come up with the dough and gave us an excuse like “Oh, you missed an interview!” You know how the biz gets sometimes. But I forgive them all because that’s their job: to bullshit people.

RG: One of the best things about 13 Featuring Lester Butler, by the way, is its punk-dirty sound.
LB: Oh yeah. I read about that in a book [laughs].

RG: The album sounds more like a natural extension of Funhouse than of any blues album. It doesn’t sound like an affectation.
LB: Thank you very much.

RG: It sounds like the next, logical step.
LB: Thank you very much. As Howlin’ Wolf said, “Make it yaws! And don’t play with nobody that don’t know their changes!” [laughs], which we thought was really funny considering how much one-chord shit he does.

RG: How did you get the dirty, mic-in-the-mouth sound?
LB: You know the mic they use for the room mic? I can’t remember what it’s called, but I was singing through that, which you’re not supposed to do, and the guys at the studio were like, “Back in the booth! What are you doing with the room mic?”

RG: In what sense is your tolerance for the blues limited?
LB: I hate the homogenized copycats who are replicating Chicago blues instead of doing what Wolf and Sonny Boy did, which was to make it evolve. And I can’t stand to see kids like – I hate to talk negative.

RG: We don’t mind.
LB: Those people who have no right to be up there singing the blues because they ain’t lived through shit – they’re little kids! “Oh, Kenny Wayne? Yeah, he’s a bluesman!” Please! I’m not trying to be egotistical, but what’s that about? Did Albert King play that way? “I’ll show you how many notes I can hit.” Oh yeah. B.B. King, Albert King, Elmore James – they were all about fancy riffs.

RG: The Gun Club guy.
LB: Jeffrey Lee, my buddy, had just died. I’d been listening to his music just the night before, and I said, “Let’s go there, and let’s be like a vanload of punks slamming into Howlin’ Wolf.”

RG: What vocals did you re-record?
LB: We did “HNC,” “Smoke Stack Lightning,” and “Baby, Please Don’t Go” up there. It got more and more punk rock as the days went on.

RG: You’re through it?
LB: Thank the Lord, I got through it. That’s what my “Smoke Stack Lightning”’s about, and that’s the thing about the whole 13 thing.

RG: By the way, should people look for the album under B for Butler, T for Thirteen, or wherever stores stock albums by bands with numerals for names?
LB: I’ve got friends calling me from all over the world, saying, “We can’t find your record. Is it 13? Is it Lester Butler and 13?” My intentions were the best – to not be “Joe Blow and the Alligators” or whatever. It was going to be “13,” and then we were going to sticker it: “New Music from Lester Butler!” But it got out of my hands.

RG: What’s special about the number 13, by the way?
LB: Besides being my lucky number?

RG: May we say Lester Butler sent us?
LB: Well, I’ll tell you. It’s a code for, like, weed and mushrooms and – you know, it’s underground.

RG: We dig.
LB: I also have this belief that all the trouble and shit you go through can carry the seeds of strength and benefit. My whole life’s been like that. I know guys who are kazillionaires, but they’re not as hard as people I know who’ve fought for the last cheeseburger in the dumpster. That’s the whole 13 thing: bad luck is good luck because it’s going to make you stronger if it doesn’t kill you. The whole album’s about being through the shit, and it’s to heal my brothers who’ve gone through the same shit. My brand-new stuff is the same. I have one called “Post-Binge Depression Blues” that’s for everybody who gets up in the morning and says, “Aw, Jesus! I can’t be alone in this!”

RG: You even have 13 songs on the album.
LB: When you come see us, you’ll be lucky to hear maybe half the album. Or maybe you’ll get the whole thing, depending on how I feel. But it’s all about spirit and emotion, about what’s going on right now. That’s the whole 13 thing. The worst shit I’ve been through – losing my best friend, “Black Hearted Woman,” all that shit – the worst shit I’ve been through is going into the best songs I’ve ever made.

RG: Do you ever worry that, now that your gutter days have passed, you might run out of material?
LB: Oh, don’t worry about that [laughs]! I’ll fuck ‘em up [laughs]! But, you know, once I was playing tennis with some rich cat I know, and all of a sudden I said to myself, “Jesus fuckin’ Christ! You’re playing tennis? You have tennis shorts on! Go to the liquor store now, get fired, get penniless, and get real with yourself, then go write some real songs, man! How are you going to write about playing tennis?”

RG: Did you go “get real with yourself”?
LB: As sad as it sounds, I did once intentionally fuck my life up. I said, “What the hell? You got money, you’re a yuppie, you got a nice car – what are you gonna say to people? ‘Hi! My life’s perfect, and it’s all good’? Now, I’m not a fan of Iggy Pop or Jim Morrison or any other sweat-drippin’ maniac. I’m not akin to them. But I spent every penny I had to straighten myself out without going to rehab.

RG: Rehab is a rich man’s prerogative?
LB: Oh, it’s pathetic. I love my brothers in NA, but I’ve lost more friends coming out of rehab because of its spring effect. Rehab crushes that spring down, and then they get out, and booiinngg! It’s really sad. I mean, I can laugh about it now, but…

RG: How did you pull through the last time?
LB: You wanna know the truth? (My personal manager’s looking at me like “What are you doing? You’re ruining your career!”) I died legally. I was lying on the table, cold blue, out – “Oh, he’s gone, we electroshocked him, we have adrenaline, he’s gone, he’s dead” – and I saw God.

RG: —–
LB: I don’t know. It might’ve been delirium or whatever, but I have certain beliefs. People look at me and say, “Yeah, sure you’ve got the ten-thousand-year-old spirit of a shaman in you [laughs].”

RG: People have believed weirder stuff.
LB: I mean, I feel it. And the more tattoos I get, the more I feel this spirit. My tattoos are like a spiritual thing to me.

RG: How many do you have?
LB: Right now I’m sleeved on both arms.

RG: “Sleeved”?
LB: Completely covered. It’s like ritual mutilation. “Hey! Guess what I feel, my close friends? Please don’t tell anyone, but I think I have the ten-thousand-year-old spirit of a shaman in me.” I don’t know its name or anything, and I don’t mean to sound egotistical, but I know I have that essence. I’ve got healing powers.

RG: People find this weird?
LB: Not my friends, but people who aren’t hip to that kind of thing just look at you and go, “Uh-huh. And I caught you reading the Bible last night. What’s that about? We caught you with the Koran in your bedroom!” I have this friend – he’s a preacher – and right now he’s on skid row. I go down and try and give him some money and buy him food and shit, and I mean he was the most benevolent cat there ever was when I first met him. And I’m not a Christian, but because he has faith in this, I’m down there reading chapters of Matthew to him, saying, “Tell me if you don’t have faith anymore. That’s cool. But if you still claim to, here we go. You’re being persecuted by hypocrites? Here’s Matthew 11: ‘Blessed are they who are persecuted because…’” I’m reading this shit to him, and some of my really cool death-rocker friends who have cool leather jackets and stuff – and I love them, too – they look at me like, “You’re a pussy. You’re no longer cool. This preacher guy is weird! Don’t bring him around here anymore.”

RG: Nice guys.
LB: I tell my life to people, and they go, “Yeah, that’s gotta be made up!” “Why’d you start playing harmonica, Lester?” “Well, it was the only instrument I could steal out of the music shop.” “Oh yeah, that’s a good line. Which publicist made that up [laughs]?”

The Real Groove is a Real Groovy Promotions publication. All rights reserved © 1997