Jasper Heikens compiled several recollections about Lester Butler and The Red Devils from emails and online newsgroups, such as the old Harp-L archives. At the time these remembrances were published, it was new information for most fans of “King King” and “13.”

Jasper said, “Remember: I didn’t write anything here … I only published the articles and/or translated them. Don’t blame me if there are errors or mistakes in the articles.”

Blue Shadows and The Cobras

The Blue Shadows were featured in a showcase for new bands at an event for radio and record companies in Los Angeles in 1991.

Bruce Willis with The Red Devils

My bass player (Jonny Ray Bartel) was with Lester and The Red Devils all during that time. They were the band Bruce and the boyz used to play all the grand openings for the chain of Planet Hollywoods around the country. He’d fly ’em out and give ’em the royal rock star treatment. That wouldn’t suck … Of course, they’d be obliged to let him sit in whenever he wanted to.

I saw Bruce twice show up at the famed KING KING Club in Hollywood where The Red Devils made their home for years. That’s where the relationship began. BTW, I never saw him gus Lester!

As a side note, a ton of celebs used to show up there as it was the hippest place to be on a Monday night in Hollywood during those years. I even saw Mick Jagger sit in with the band once. He subsequently recorded a bunch of blues sides with the Devils backing him, which I’ve heard. Not bad at all. 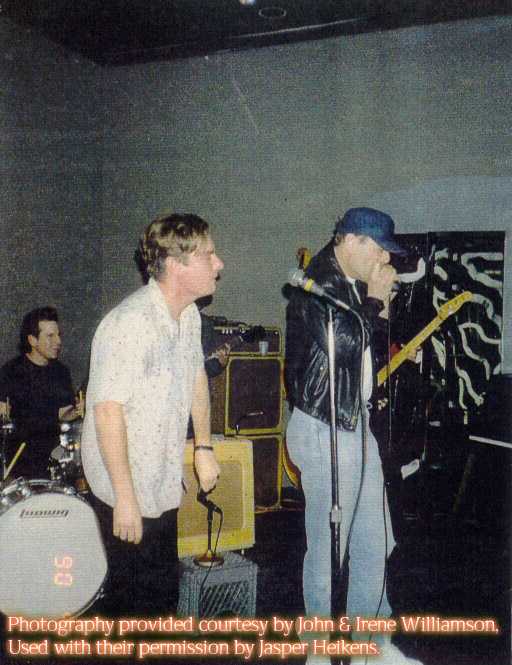 I have heard him playing. Albert Collins used to call him up at gigs around the L.A. area in the late ’80s as “Bruno.” Albert told me personally that Bruce is a real nice cat, but that he only invited him up to play because Bruce had gotten him into a famous soda pop commercial.

Bruce seems to get invited on stage at upscale events because he is Bruce (famous). The crowd seems to love it. While all the harp players in the house seem to cringe. If he were not “Bruce” he wouldn’t be getting invited to sit in on the merits of his harp playing alone. But that’s no big secret … is it?

PS: Willis used to hire Lester Butler & The Red Devils for private parties quite a bit. One time he rented Magic Mountain for a private party, and paid the band 5 G’s … must be rough!

Bruce Willis’ first record came out when I was about 12 or 13 and had just started playing harp and I would buy ANYTHING that had harmonica on it. There is some very fine harp on those records, a nice mix of R&B-flavored songs with some nice horns that didn’t overpower the harp. The second album also has a great instrumental with Robben Ford and a bluesy ballad called “Blues for Mr. B” or something like that. He’s better when he sticks to his original songs that cover the blues side of R&B that instead of covering “Under The Boardwalk” and “Youngblood” and doesn’t do that white guy-gravelly-voice-thing that drives me nuts, no matter who does it.

Around the same time Willis embarked on a tour and made the mockumentary “The Return Of Bruno” that features some live stuff that is quite good. One highlight had Willis onstage alone walking around and blowing some very fast and very smooth stuff.

Last winter at a Rod Piazza show in L.A. Bruce Willis quietly entered the club walked right by me and sat in the corner. Rod had told me that Bruce was a fan and had the band play private parties and whatnot for Bruce. I thought it was cool he was there but I knew that I sure wasn’t going to sit in that night. Rod brought him up and Bruce commenced to sucking, big time. It was obvious he hadn’t played in a while. He was sloppy and his musicianship as far as leading the band was weak. After a few tunes he told Honey to start off something. If you had half an ear it was obvious, at least to me, that it was a slow blues in D. Bruce spent about 5 minutes shuffling through his briefcase trying to find the right harp without singing a word. Rod recognized the trouble and, cool as ice, walks from the back of the club to the stage and in the middle of the progression on the IV starts singing like he had been there the whole song.

When Bruce Willis first started out he was a singer, he played with quite a few groups and he was always the person to leave the group and not the one that was sacked from the group. A while before that he knew that he wanted to become an actor, some of the most famous groups that he was in were Bruno and the Bad Boys, who sung “Coming Right Up.” And he sung “Under The Boardwalk” with The Temptations.

Lester used one (or a pair) of Bassmans and a digital delay pedal. He didn’t push the amp in the preamp stage too much. That, combined with the use of the pedal, produced that ringing, metallic grit that he got. An Echoplex with a Bassman will get that same sound if you back off the effect pretty far. (The back of the “King King” album is a photo of Lester’s mic sitting on an Echoplex.)

Mick Jagger is on record as stating that they were his favourite band. There is a website that has a clip of him actually singing with them. Apparently it was to be released as an album but for some reason the project fell through. Lester Butler was the harp player for the band and IMHO he had one of the most distinctive styles around. He was discussed on Harp-L around the time of his death and the consensus seemed to be that although he wasn’t the most technical harpist out there he did play with a lot of passion and raw power. Boo … ti … ful stuff I reckon. Sort of complete antithesis to the (John) Popper high-end pyrotechnics school.